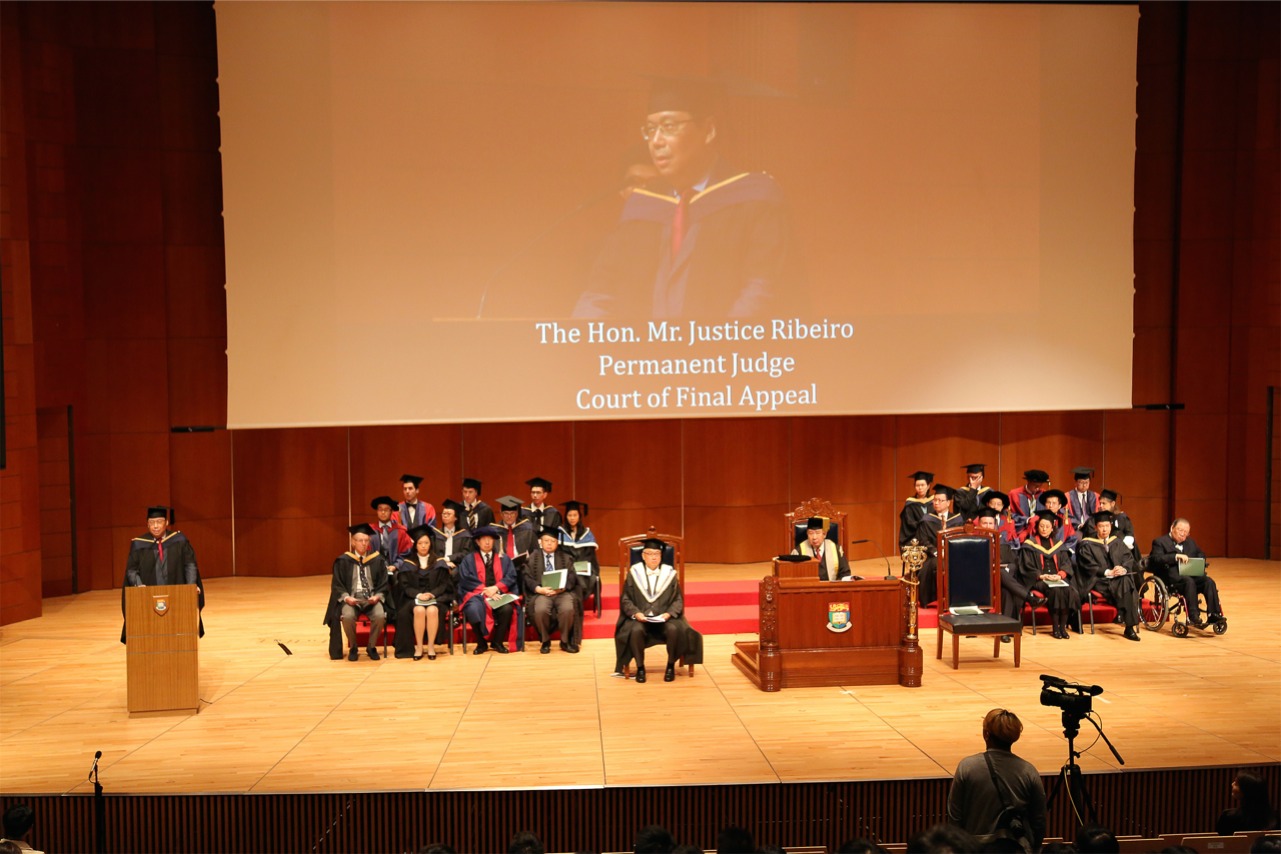 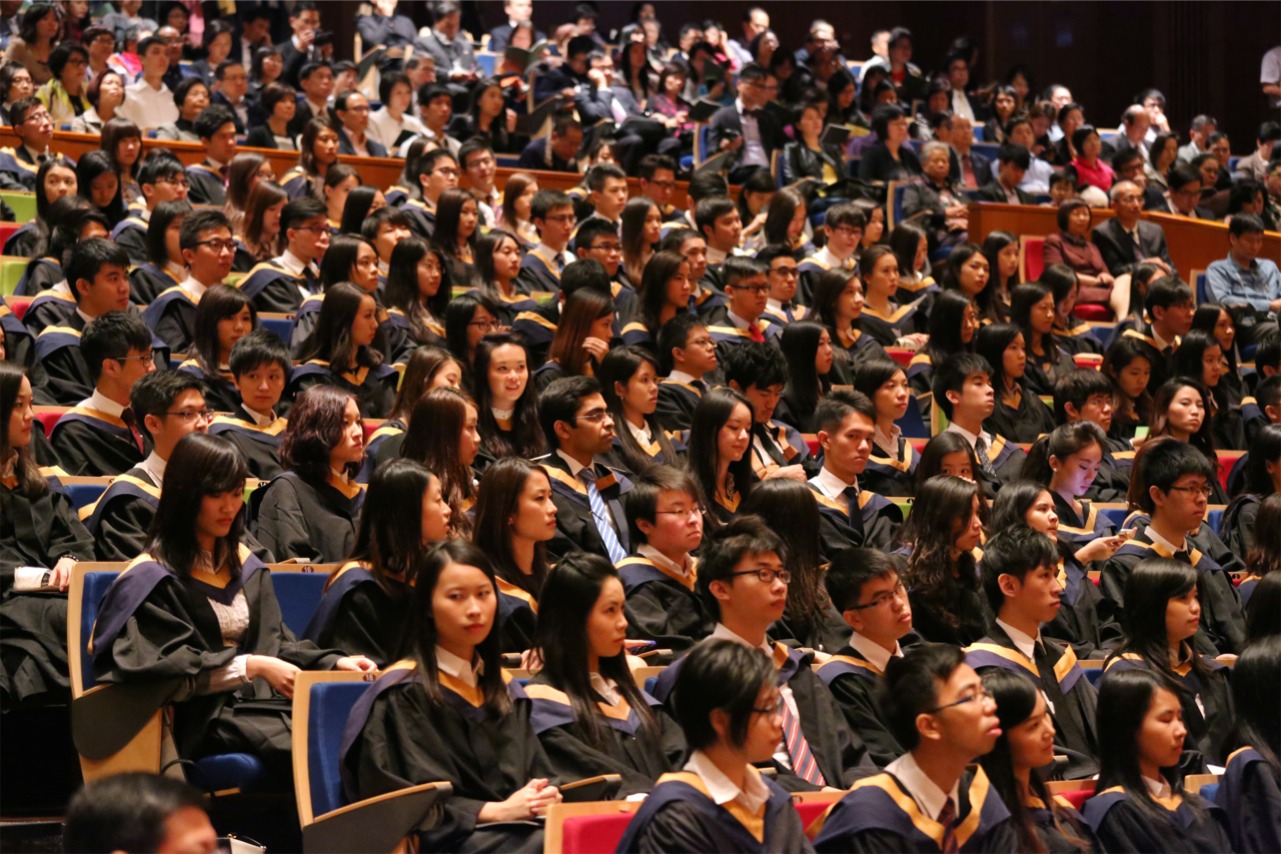 The Hon Mr Justice Ribeiro, Permanent Judge of the Court of Final Appeal graced the LLB Graduation Ceremony 2014 with his presence as our Guest-of-Honour. His speech is re-produced in full below.

I am most honoured and privileged to have been asked to address you on this happy and auspicious occasion.  To each of you who are about to receive your Bachelor of Laws degree, I offer my warmest congratulations.

You and your families have every reason to feel proud today.  It was a very important decision you took when you decided to study law.  That decision has taken you on a demanding journey, but, I am sure, also a journey that has been stimulating and rewarding.  Today you have reached your first goal: your degree as a law graduate from this fine University.

It has taken much hard work as the law is no easy task-master.  And in many cases, it will have involved significant sacrifices on the part of your families.  They share in your achievement and in your celebrations today.

There are other milestones that await you on the road ahead.  But having completed your law degrees, you will have attained a sound foundation in understanding legal principles and processes, as well as an understanding of how our society works and the importance of the role that the law plays in it.  You will have developed your analytical and critical faculties, and your skills of communication, argument and persuasion will have been honed.  Such knowledge and skills provide you with the foundation for building a successful career, whatever may be the path you choose to follow.

Today’s graduation ceremony has, however, a particular significance, falling as it does at a time when our community has seen itself divided and polarised as seldom before, over the issues of electoral reform and the political development of Hong Kong.  I am sure that some of you will have been amongst the students who have been at the forefront of the demonstrations advocating full democracy.  No doubt, there will also be some amongst you who have disagreed with some of the actions taken by the demonstrators.

It is highly relevant in this context that you are a graduating class of law students.  As such, you will be an essential part of our legal system for many years to come.  Among you will be our future barristers, solicitors, law teachers, government counsel, in-house legal counsel and the like.  And from your ranks will come our future judges, legislators and senior public officials.

The greater the polarisation of our society, the sharper the conflicts, the more important it is that we preserve what is precious – the more important it is that we safeguard the rule of law which everyone acknowledges to be the cornerstone of our way of life.  For the rule of law cannot be taken for granted.  It requires constant vigilance and effort.  It is essential that law graduates like yourselves, now and when you take your place as our lawyers of the future, should maintain that vigilance and conscientiously promote the values embedded in the rule of law.  You must reflect those values in your work, and share your understanding of those values with others.  It will be up to you, and lawyers of your generation, to ensure that Hong Kong remains a society that enshrines the rule of law.

Against that background, I would like to highlight the challenge faced by the Judiciary in this time of social controversy.  The challenge is to uphold the rule of law, protecting our fundamental human rights while remaining independent and impartial – and, crucially, being understood and perceived by our community as an independent and impartial Judiciary.  Inevitably, cases will come before the courts for decision which arise out of politically charged situations.  The danger is that in deciding such cases, the Judiciary may wrongly be perceived to have been drawn into taking sides politically.  It is therefore important for everyone, and particularly for lawyers and law graduates like yourselves, to have a clear appreciation of the task the courts are performing when deciding such cases.

We might start by reminding ourselves of what is the essence of the Rule of Law.  You are all, I am sure, well familiar with Lord Bingham’s foundational work on the Rule of Law.  In it, he describes the core of the rule of law as the principle that:

“… all persons and authorities within the state, whether public or private, should be bound by and entitled to the benefit of laws publicly made, taking effect … in the future and publicly administered in the courts.” 1

His Lordship was stressing two key features that are relevant to understanding the role played by the judges: The first is that the rule of law applies to everyone.  No one is above the law.  Secondly, the rule of law involves both being entitled to the benefit of the law and being bound by the law.

Lord Bingham, you will recall, emphasised that there can be no rule of law worth having unless there is adequate protection of fundamental human rights.  This has very much been taken to heart in Hong Kong.  As you will be aware, since 1997, our courts have been building up a body of decisions concerning the rights and freedoms constitutionally guaranteed by the Basic Law and the Bill of Rights.  We have had occasion to consider, the right to freedom of expression, to peaceful assembly and peaceful demonstration; the freedom to travel; the right not to be discriminated against under the law; the right to a fair trial and to be presumed innocent when accused of a crime; the prohibition of torture; the prohibition of cruel, inhuman or degrading treatment; the right to marry; and the right to social welfare, among other rights and freedoms.

This process of establishing a culture of respect for the rule of law and human rights is, of course, not just a matter for the judges.  It is and must be the endeavour of the whole community.  A culture of such respect cannot be sustained without the support of all branches of government and of the public at large.

The courts’ approach to the protection of fundamental rights illustrates how they must seek to achieve a balance between competing rights and interests.  In some cases, such as the right not to be subjected to torture, the right is absolute.  But in seeking to give effect to most of our constitutionally guaranteed rights and freedoms, the courts endeavour to establish a proper balance between protected rights and legitimate countervailing interests.

The Court of Final Appeal has said many times that our Courts must ensure that Hong Kong residents and other persons present in Hong Kong enjoy the full measure of our guaranteed rights and freedoms.  At the same time, it has also stressed that our rights and freedoms, including the freedoms of expression, of peaceful assembly and of peaceful demonstration, must be exercised while respecting the rights and freedoms of others. This is stipulated in Articles 16 and 17 of the Bill of Rights.  And Part III of the Basic Law guarantees our fundamental rights while at the same time reminding us in Article 42 that everyone has the obligation to abide by the laws in force in Hong Kong.  This finds an echo in Lord Bingham’s distillation.

It is accordingly important for all to understand that in discharging their adjudicatory duties impartially, the Courts regard this dual requirement as a necessary condition of the rule of law and of respect for human rights.  Every member of our society is entitled to the equal protection of the law – entitled to the protection of our individual rights, whether in the domain of public or private law.  But enjoying such protection carries with it the requirement that each of us abides by our own obligations under the law.  An independent and impartial court cannot allow one party to pick and choose what laws to obey while ignoring laws that do not suit him or her.  It is of course fundamental that the Courts will ensure that each individual is fully entitled to the protection of habeas corpus and of laws which restrain the use of excessive force.  At the same time, the Courts would not be acting impartially if they were to allow individuals, claiming those rights, to ignore laws and orders of the Court which are designed to protect the legitimate rights of others.

The courts are obviously aware that there exist bitterly opposed camps, each passionately believing in the rightness of their political cause.  They are particularly conscious of their duty to decide cases where these opposing camps are ranged against each other in a transparently independent and impartial manner.  To reach their decisions, the courts must ascertain where the constitutional balance lies.  They have to identify the proper scope of the rights asserted by each side.  They may conclude, for instance, that an injunction should or should not be issued in a particular case.  Naturally, the result will be perceived by one side as a victory and by the other side as a defeat.  But it is vital that everyone appreciates that in so deciding, the court is not taking sides politically.  It is performing its essential function of applying the law which requires a balancing of competing rights.

There is no tension between the protection of political and human rights on the one hand, and safeguarding the rule of law, on the other.  Neither seeks to trump the other.  They are objectives which complement each other.  They both postulate the protection of the basic rights of individuals, limited by the obligation to respect the rights of others.  It is only on this even-handed basis that the Judiciary can resolve conflicting claims impartially and independently.

It is essential that this process is understood so that the independence and impartiality of the Judiciary continues to be recognized and members of our community continue to respect the rule of law and support the protection of human rights.

And where, having weighed up the claims, the Court issues orders aimed at protecting those individuals whose rights it holds to have been infringed or are under threat of infringement, the rule of law requires those orders to be respected.  Of course, the correctness of those orders may be open to challenge on appeal, but no Court, acting independently and impartially, can accept a flagrant disregard of its orders by one side or the other.

This is where you have an important role to play.  It falls to graduates like yourselves, now and as our future lawyers, with your legal knowledge and understanding of these fundamental principles, to contribute your intelligence, your learning and your objectivity, to the important public discussion that continues.  Yours is a generation that must take up the challenge with Hong Kong at a pivotal stage of its social and political development.

As you embark upon your chosen career, which I hope will be rewarding in every sense, you and your peers represent the hope and means of preserving our precious asset of the rule of law, upheld by an independent and impartial Judiciary. You are the hope for improving the governance of our society, whatever may be the political challenges that we face.

I am sure that you will rise to that challenge and that your generation will make valuable and lasting contributions to our community’s future.  I would like to end by wishing each of you every success and happiness whatever may be the path you choose to follow.