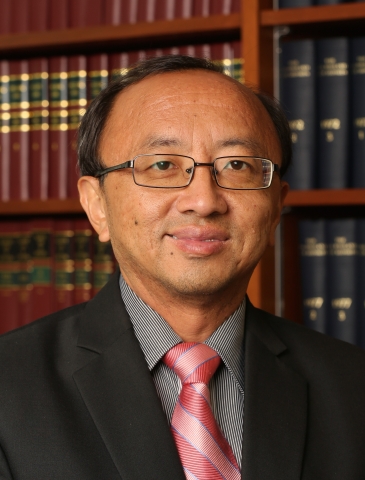 The Department of Law

Eric Tat Ming CHEUNG (張達明) was born and educated in Hong Kong. Upon his admission as a solicitor of the High Court of Hong Kong in October 1989, he worked as a litigation solicitor at Johnson Stokes & Master (now known as Mayor Brown JSM), the largest law firm in Hong Kong. He was admitted as a partner of the same firm in October 1994. He has been teaching law at the Faculty of Law, University of Hong Kong since December 1996. He is also a part-time consultant of ONC Lawyers.

He is currently the Director of Clinical Legal Education in the Faculty and has been in charge of the Clinical Legal Education Course since its introduction in January 2010. Apart from his services through a great number of public and professional bodies, he has contributed significantly to the promotion of the Rule of Law and legal education to the public. He is frequently invited to speak on legal issues by television and radio programmes as well as in newspapers as a recognised legal scholar on the Basic Law and Rule of Law issues. He has acted on a pro bono basis for the defendants in a number of criminal cases.

Eric Tat-ming Cheung, Assistant Professor, joined the Department of Professional Legal Education in December 1996. He was qualified as a solicitor in Hong Kong in 1989 and became a litigation partner of Johnson Stokes & Master in 1994. When he was in full practice, his main areas of work included building and town planning appeals, judicial reviews, professional negligence claims, building and construction litigation, and general banking and commercial litigation. He is the course coordinator of the subject of Civil Procedure in the PCLL course at HKU.

His current research includes Civil Procedure, the laws of Maintenance and Champerty, and Basic Law and Rule of Law issues.

Mr. Cheung is a chairman of the Buildings Appeal Tribunal. He served on the Hong Kong Law Reform Commission from 1994 to 2000, its Sub-Committee on Supply of Goods from 1998 to 2002. He also serves actively on various committees of the Hong Kong Law Society (including the Constitutional Affairs Committee, the Bilingualism Committee, Continuing Professional Development Committee and Overseas Lawyers Qualification Examination Panel), the Hong Kong Bar Association’s Bar Qualification Examination Panel (Civil Procedure and Civil Evidence), the Judicial Studies Board and the Consultative Committee on the Resource Centre for Unrepresented Litigants run by the Judiciary.

Apart from his services through the public and professional bodies, Mr. Cheung has also contributed significantly to the promotion of the Rule of Law and legal education to the public. He is frequently invited to speak on legal issues by television and radio programmes as well as in newspapers as a legal scholar. He was elected by members of the legal profession in April 1998 and in May 2005 to be one of its 20 representatives in the 800-member Election Committee. He has assisted some defendants on a pro bono basis in a few criminal cases.