This webinar is organized by the Centre for Comparative and Public Law at The University of Hong Kong and will be held via Zoom Meeting. Prior registration is required.

Since the 1981 judgment of the European Court of Human Rights in Dudgeon v. United Kingdom, the Court has developed a body of case law requiring equal treatment of lesbian, gay and bisexual (LGB) individuals and same-sex couples in the criminal law, in access to employment, education, housing and services, and in family law. At the national level, 16 of 47 Council of Europe member states (one third) provide equal access to marriage to same-sex couples, even though the Court does not yet require this. Nearly 64% (30 of 47 member states) now offer same-sex couples “a specific legal framework” for their relationships (which the Court does require), either marriage or an alternative with a different name. This trend, which began in Denmark in 1989, reached Taiwan in May 2019, when the law implementing the Constitutional Court’s May 2017 decision entered into force, and same-sex couples began to marry for the first time in Asia. What legal reforms are required to achieve equality for LGB individuals and same-sex couples in Hong Kong? Which could be granted by the Hong Kong legislature, and which are more likely to be granted by the Hong Kong courts, in light of Q.T. (same-sex partner immigration), Leung Chun Kwong (limited recognition of New Zealand marriage), M.K. (absence of same-sex marriage or an alternative in HK upheld), Ng Hon Lam (limited recognition of UK marriage), and Sham Tsz Kit (no general recognition of New York marriage)?

Originally from Canada, Professor Robert Wintemute teaches Human Rights Law, Anti-Discrimination Law, and European Union Law at King’s College London, England. He studied Economics at the University of Alberta and Université Laval, and Common Law and Québec Civil Law at McGill University, before completing his doctorate on Sexual Orientation and Human Rights at the University of Oxford. He was the first openly gay lawyer at the Milbank law firm in New York, where he was introduced to pro bono strategic litigation in 1985. Since 2000, he has participated in LGB equality cases in the European Court of Human Rights (X & Others v. Austria, Oliari & Others v. Italy, Taddeucci & McCall v. Italy), the Court of Justice of the European Union (Coman & Hamilton v. Romania), the Inter-American Court of Human Rights (Atala v. Chile), the Constitutional Court of Colombia, and the Supreme Courts of Argentina, Massachusetts (Goodridge), the United Kingdom (Walker), and the United States (Lawrence & Garner v. Texas). He has spoken about LGB human rights in many countries or regions, including Japan, South Korea, Mainland China, Taiwan, Hong Kong, the Philippines, Vietnam, Singapore, Indonesia, India, and Sri Lanka. 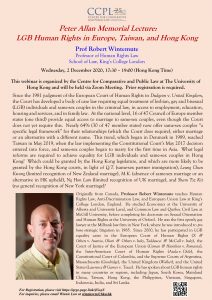