Monday, 4th November 2019, 17:30 – 18:30
Academic Conference Room, 11/F., Cheng Yu Tung Tower
Centennial Campus, The University of Hong Kong
Assembling in publicly accessible places provides a uniquely powerful way for a movement to register the intensity of support it enjoys. It is often also a transformative experience for those who participate. Drawing on international standards and illustrative examples from around the world, this talk will address several regulatory practices encountered by protesters in Hong Kong (including those introduced under the 1922 Emergency Regulations Ordinance and the ‘unlawful assembly’ provision in section 18(1) of the Public Order Ordinance). Highlighting the ongoing work of the UN Human Rights Committee in drafting General Comment 37 on the right of peaceful assembly (under Article 21 of the International Covenant on Civil and Political Rights), the talk will consider the key role and obligations of the police in protecting and facilitating peaceful assemblies. Moreover, in relation to strategies of de-escalation, the talk will highlight the important work potentially undertaken by legal observers and assembly monitors. The talk will argue that the design of robust institutional safeguards and independent mechanisms of accountability are ultimately crucial to ensuring an effective right of peaceful assembly.
Dr Michael Hamilton is a Senior Lecturer in Public Protest Law at the University of East Anglia and a visiting Professor at Central European University. He is a member, and secretary, of the OSCE-ODIHR Panel of Experts on Freedom of Assembly and has undertaken reviews of draft assembly laws in several countries in the former Soviet Union. He has also worked with a wide range of NGOs in delivering training to assembly monitors, contributing to strategic litigation efforts on the right of peaceful assembly and analysing the response of States to opposition protest movements.
For Registration, please click HERE
For inquiries, please email Winnie Law at 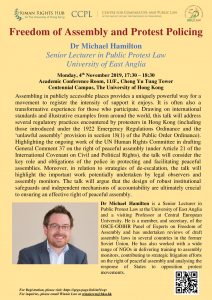