Promulgated on 30 June 2020, the Law of the People’s Republic of China on Safeguarding National Security in the Hong Kong SAR (the National Security Law, NSL) promises to be the most important legal development in Hong Kong since the advent of the Basic Law. Supporters of the law say it is essential to public order in Hong Kong and security in China. Critics fear that it will have a significant and adverse impact on the spirit of the “One Country Two Systems” arrangement which has been in place since the return of Hong Kong to China. One year on, this Symposium brings together some of the leading experts on the Hong Kong and Chinese law who will discuss how the different aspects of Hong Kong’s legal system has been or will be affected by the NSL. It anticipates the release of a collection of essays edited by Fu Hualing and Michael Hor, which will be published by Hong Kong University Press later in the year.

· Ryan Mitchell (CUHK), Theories of Sovereignty in the Origins and Implementation of Hong Kong’s NSL

· Albert Chen (HKU), The National Security Law of the HKSAR: A Contextual and Legal Study

In-Person Attendance at the Large Moot Court is only open to HKU Staff and Students. 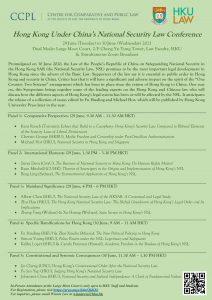