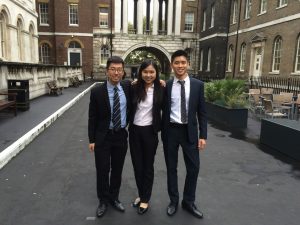 The Foreign Direct Investment International Arbitration Moot 2015 (“FDI Moot”) took place between 29 October and 1 November 2015 at King’s College London. This year, a record number of 51 teams competed in the global orals of the competition. Amongst them was the team from HKU, comprising of LLB students Angel Cheng, Sean Yau and Sunny Hor, coached by LLM student Andreas Wehowsky.

The FDI Moot simulates an investor-­‐state arbitration. The subject of the moot is a claim by a private investor against a sovereign state for an alleged violation of a Bilateral Investment Treaty (“BIT”) between two states. The hearing takes the form of an arbitration conducted in accordance with the procedural rules of an established international arbitration institution – this year the London Court of International Arbitration (“LCIA”).

Our team was one of the six Asian teams which had advanced to the global orals from the Asia-­Pacific round, held earlier in August in Seoul, Korea. In the global orals in London, the HKU team faced strong competition from teams from around the world. After four exciting pleading sessions with countless challenging interventions from the tribunals, the team eventually finished with an overall score placing them 18th out of 51 teams – a very pleasing result.

The FDI Moot provided a fruitful reasoning experience for all team members.