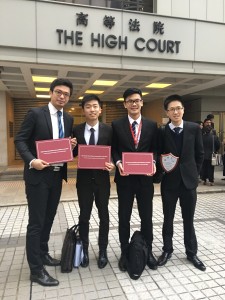 The 15th Red Cross International Humanitarian Law Moot was successfully held in Hong Kong from 7th to 11th March 2017. After rounds of intensive competitions amongst 24 participating universities from over 20 regions, the HKU Team has proceeded to the Finals and captured the First Runner Up.

The Moot was based on a fictional case concerning war crimes and crimes against humanity. Mooters were to appear before the Pre-Trial Chamber of the International Criminal Court for the purpose of confirming the charges (a procedure similar to committal proceedings in Hong Kong criminal proceedings). International humanitarian law has become an increasingly important area of law in light of the prevalent armed conflicts around the world. This year’s moot problem also raised exciting issues concerning new modes of warfare such as the employment of unmanned drones to launch missiles and the use of cyber operations in war. Judges of the Moot included international court judges, legal practitioners, and members of the International Committee of the Red Cross.

The Team was formed after the selection round in October 2016, with students coming from different cohorts and programmes. To prepare for the Moot, extensive research was conducted throughout the year on various treaties (such as the Geneva Conventions, the Additional Protocols, and the Rome Statute) and precedents from international courts.

Furthermore, numerous practice sessions were held before the Moot. Through these sessions, the Team has tremendously benefited from rigorous questions and issue-cutting comments on advocacy style from members of the Faculty and the legal profession. For this, the Team would like to express their sincere gratitude to Professor Anselmo Reyes, Mr Martin Kok, Ms Jacqueline Law, Mr Michael Lok, Ms Yvonne Ngai, Mr Artem Sergeev as well as members of the previous Red Cross Moot Teams for their kind assistance.

Last but not least, a round of applause must be given to the Team Coach, Mr Ernest Ng, for his unfailing support – for indulging the Team’s ignorance, advising on moot strategies, and answering the Team’s last-minute queries, even at five in the morning.

As one of the five prestigious international moots under the Faculty’s International Competitions Programme, the Red Cross International Humanitarian Law Moot has given the Team the opportunity to polish their advocacy skills and rewarded the Team with lifelong friendships. The Team highly recommends law students to join the Moot in the years to come.