Speech by The Hon Madam Justice Yuen at the 196th Congregation

So I never had the chance to step on a stage like you wearing a gown and mortarboard, and that’s why my parents were actually quite suspicious whether I had ever gone to university at all!

So I would first thank you, President and Vice Chancellor, for giving me this opportunity today, and of course I extend my warmest congratulations to you, the Postgraduate Graduating Class of 2016.

Reading the list of degrees to be conferred, I am struck by the breadth and depth of the subjects – apart from Common Law, the subjects include Legal Science, Human Rights, Corporate and Financial Law, Chinese Law, Information Technology and Intellectual Property Law, and Arbitration and Dispute Resolution.

I am glad to see that these subjects are representative of, and closely relevant to, contemporary life in HK.  We live in a dynamic financial hub, closely linked to China, and in a community, sophisticated in technology and well-informed about commercial affairs, which has also become increasingly conscious of the reach, and the limits, of the individual’s civil and political rights.

I am sure that in each of these subjects you have studied in depth, you have come across many complex issues. For each general principle, there are exceptions to the rule.  For each apparently clear formulation of the law, there are subtle niceties to be understood.

But these subjects you have studied, complex as they are, cover only some aspects of human activities (by which term I include activities of institutions and government, for they are run, after all, by people rather than by algorithms from computers).

There are many more activities which affect, or are affected by, other areas of the law.  Indeed there are human activities now, for which there is no law, or no fully developed law.  Take cryonic preservation as an example.

In short, fortunately for the human race, there is no limit to human ingenuity.

But the more sophisticated people or issues become, the more intricate disputes become.  The more wide-spread technology becomes, the closer the attention from all directions to how the disputes are resolved.

Given the discipline you have chosen, I trust you agree with me that the law is the best means we know (so far) of providing a rational and fair way to resolve the many disputes in human activities in contemporary society — a rational and fair way of ordering human activities, which is applied to all individuals and institutions and government.  To me, that is what the rule of law means.

In light of our increasingly sophisticated world, the law has to develop tirelessly in order to deal with the day-to-day resolution of disputes appearing in all sectors of human activities.  Hence the thicker your law books have become, or should I say, the greater the number of bytes of the materials in digital form that you have to consult.

And for the contemporary judge, the more detailed the reasoning which is required of him/her in order to arrive at — and to explain — the conclusion by which disputes are resolved.

The work of judges in contemporary society, whether in HK or the UK or other parts of the world, has become more complex. 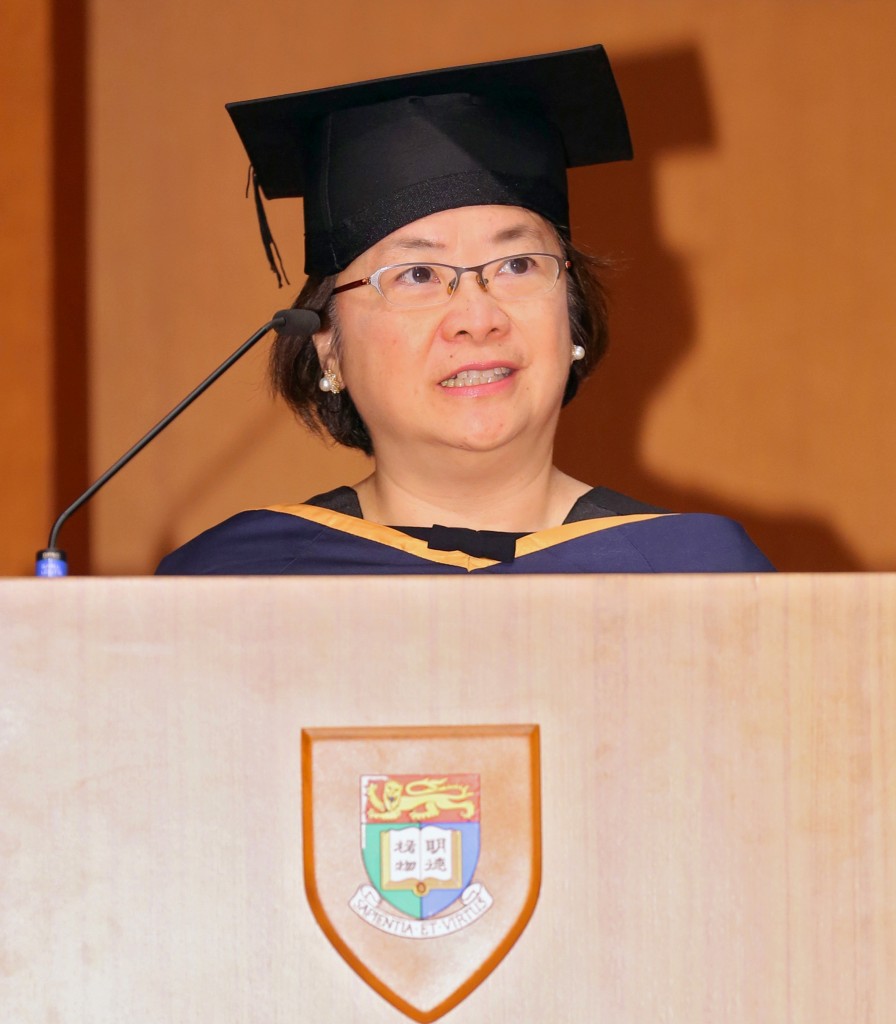 First, there are more issues and disputes than ever, as people become more aware of their right to access the courts, and more inclined to pursue it.

Second, the technicalities of the law have become much more complex (as I said, more legislation, more case law, more principles, more exceptions, and more subtleties). To keep up with constantly developing human activities, the law cannot, and does not, remain static.  Judges cannot get by with the law we learnt at university or argued in practice.  We have to learn new law so that we can understand and apply it.  Of course the lawyers appearing before us will make submissions on the law, but in an accusatorial system, they will argue it in the way they think would best advance their clients’ interests.  That is as it should be.  It is for the judge to find the “golden thread”, the true principle running through the cases and other materials cited by the lawyers.  It is an intellectual exercise that is fascinating but which can also be frustrating and time-consuming.

And third, having understood the issues formulated by the parties, and digested all the newest legal materials, we must explain our reasoning in the clearest way we can.  We can no longer write judgments to be read only by the lawyers of the parties in any particular case.  That would be much easier and quicker for us, as they already know the factual background and issues, and we can also use legal shorthand.

But nowadays we are writing judgments that may be instantaneously accessed by the media, interest groups and indeed anyone who clicks into our website.  The language we are recommended to use is as if we are explaining our decision to an “intelligent next door neighbour”, in other words, someone with no pre-existing knowledge of the background, the issues or the law.

As judges, we expect and accept intense scrutiny of our reasoning process.  That is the whole point of the adjudicating process.

No litigant would accept a judgment in which, after days of hard work put by lawyers into legal submissions written and oral, all that the judge says is “you win and you lose”.  In other words, no litigant would accept a judicial process in which the judge only gives the result, but not the reasoning.  That would be the antithesis of the judicial process.

You and I, we are all subjects of the rule of law, but judges are its most immediate servants.  We decide a case, only by applying the facts (agreed or found) to the law as we understand it.  Just as we cannot twist the facts, we cannot manipulate the law. And our judgments reflect our reasoning – why we found the facts to be so, what we understand is the law, and how we applied the law to the facts of the case.  That is all we do, and that is all we can do.  And that is the same for every case.

Of course we may be mistaken in our understanding of the evidence, or the arguments of law, or in the application of the law to the facts, but that is what the appellate process is for, so that our reasoning may be thoroughly examined at every level.

Unlike some other systems of law, an appeal in our system is not a re-hearing in which everyone goes back to square one and re-argues the case afresh.  In our common law system, the appellate court’s focus is on the reasoning underpinning the lower court’s decision.  It is by this analysis that we test the conclusion.

In my view, in the same way that a judge cannot give a judgment with only a result, without setting out full reasoning for it, it is disappointing when people praise or criticize a judgment for the result and the result only, without having understood and analyzed the reasoning in it.

Recently, not only in this jurisdiction but also in others, we have seen judgments (or even individual judges) praised or criticized by one side or the other, or in the media, for the result and the result only.  In applying a simplistic “knee-jerk” reaction, where praise or criticism is automatically activated by the result alone, these approvers or detractors do not even engage with the reasoning in the judgments.  This is despite the fact that in some “high profile” cases here and overseas, the reasoning is set out in summary form by judicial assistants and published at the same time as the judgments themselves.

In my view, in the same way that one expects the reasoning in a judgment to be rational and fair, it would only be rational and fair for approvers and detractors alike, to first consider the reasoning which led to the result.  It is really only then that anyone – be it an appellate court, the litigants, the media or anyone who is interested in the dispute – can begin to understand:

·         and then and only then, finally, the process of reasoning which led the judge to arrive at the conclusion.

The person who praises or criticizes a judgment based on the result alone may be too lazy to bother to read through it, or if he had read it, he may be disingenuously ignoring unimpeachable reasoning.  It matters not to judges, for we cannot, and do not, talk back.  We speak only through our judgments, and we can, and do, speak only on the issues in the actual case before us.  Indeed in our guide to judicial conduct, it is stated that it is generally “inappropriate behaviour” for a judge to defend his judgment publicly.

And that, to me, is the embodiment of judicial independence.  It encompasses independence from all forms of outside influence, explicit or implicit, institutional or personal.  It is ingrained into us that judges must act without fear or favour.  To me, that is short-hand for saying that we must decide each case that comes before us, on the issues as argued in court, and on the law as we honestly understand it, in order to arrive in good faith at a conclusion that the law commands, irrespective of acclaim or criticism, from whichever sector of the community.

In conclusion, I hope that you, the Postgraduate Graduating Class of 2016, as members of the legal community, will explain this spirit to all those who you come across.  I ask that you not only support the rule of law and judicial independence in theory, but also put that support into practice.  Remember, next time a “high profile” judgment comes out, please don’t immediately flip to the end page or scroll down to the end paragraph, no matter how anxious you are to know the result.  Please read the judgment from beginning to end first, and reflect on it a while, before you pass judgment on us.

I thank you for listening so patiently to me and it only remains for me to wish all of you the best of luck in the future.